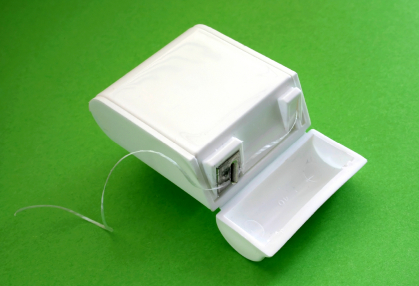 Flossing is one of those techniques that rely on good friction to remove the mildew-like growth out from under your gumline areas and between your teeth. And our patient Jean asks if it’s better to brush before or after she flosses.

Scientifically speaking, there seems to be no difference in someone’s long-term health on the order they choose. Patients can even floss at a totally separate time from their brushing, and as long as they’re cleaning between their teeth at least once per day, the effects are equal. Proponents of brushing first don’t like the idea that they are pushing plaque back in between their teeth and have more to scrape off with the floss if they use it first. And those who prefer flossing first equate it to cleaning under your fingernails before you wash your hands, because then you’d get the picked-out dirt all over your freshly-washed hands if you do it afterwards. Another concern is that the fluoride in toothpaste won’t penetrate as deeply into tooth enamel as it will if you scrape out the in-between plaque first with floss.

Answering this question is sort of like trying to answer which way is the right way to hang toilet paper – over or under? It depends on what works best for you personally. If you don’t feel a sway towards one preference or another, however, there is a slightly more right way, sort of like the toilet paper issue. And the reason that it’s right has nothing to do with effectiveness.

The reason that you should floss before you brush has to do with your emotional response, actually. Don’t you love the feeling you get just after brushing? How your mouth tastes fresh and clean? So clean that you’ll… forget to floss? Ah HA. That’s the real answer. If you floss first you’re assuring that it’s getting done. Flossing can make your gums even feel a little unsettled, so what better way to get them back to normal than to massage them afterwards with your toothbrush? Or think of your toothpaste bubble bath as a little reward for flossing. We all need to feel more positive about having to do things that are a little mundane or unpleasant.

So that’s the answer. Floss before you brush, because just flossing is more important than when you floss.