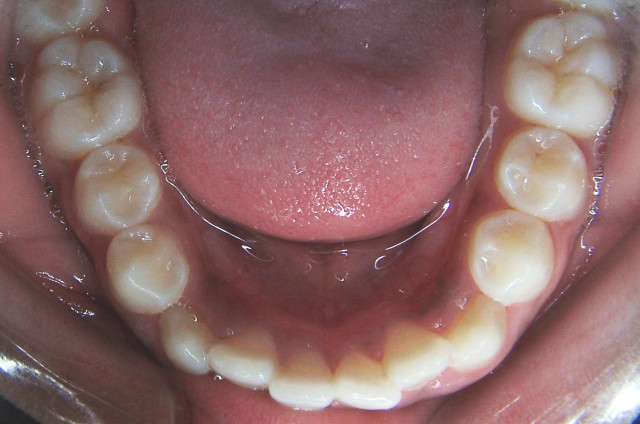 Kids seem to grow their fastest over the summer, right? We’ve seen many children the last few weeks with brand new teeth coming in behind all of their other ones. These teeth appear in three sets: the first molars which erupt around the age of six, the second molars that come in around age twelve, and finally the third molars, also known as wisdom teeth, which erupt anywhere from age 17 to 22.

You may have noticed that molars have higher bumps and valleys than most of the other teeth. The low spots are very susceptible to cavities because the outer layer of tooth, called enamel, is much thinner there. Newly erupted teeth are especially high-risk for developing decay because sometimes the enamel might not even completely seal against itself in the deepest grooves and it can be only a matter of months before large hole has appeared deep inside the tooth because it was able to penetrate a tiny defect.

This is one of the most important reasons children should visit the dentist every six months. As we perform our exams we are on the alert for new teeth that might be coming in, because we have a treatment for these newbies that will effectively thicken the thin part of enamel and prevent a cavity from ever forming. This treatment is what we call a dental sealant. 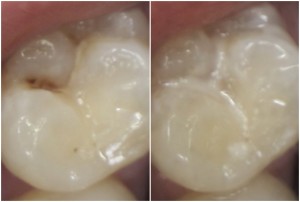 As soon as a tooth has erupted enough so that all of the grooves can be accessed, we will usually recommend that a sealant be placed on it. We will clean and dry the deepest grooves, place a strong conditioner on the tooth that will help the sealant stick better, and then flow a liquid plastic down into the fissures and quickly cure it with an intense light that will instantly set the plastic. The final result doesn’t look much different than an unsealed tooth, but kids can definitely notice a change when we check the tooth afterwards. Before the sealant, the tooth will sound scratchy when we rub the tip of a metal explorer over the surface, but afterwards it feels like glass. Another thing patients might notice is that their bite changes a bit, but that sensation will soon return back to normal. There is no drilling, no discomfort, and definitely no shots needed for this procedure.

We occasionally will also recommend sealants for adults with deep grooves that look like they might be “going south.” Generally speaking, adults aren’t as much at risk for pit and fissure decay, but if you’d rather have us place a sealant instead of “watching” a suspicious area on a tooth we’re very much as interested in prevention as you are.